The links above provide include a course outline and a link to register for the Jump Start. And even if you can’t join live, the recordings will always be made available at a later time so you can watch whenever it suits you better.

PowerShell DSC is becoming increasingly important and I personally also still need to learn more about it and look forward to it.

I hope it’s useful to you as well.

As I mentioned earlier, Microsoft is offering free exam vouchers for the new exam “74-409 Server Virtualization with Windows Server Hyper-V and System Center”. For more information, take a look here.

I took the exam today and passed after having studied very hard for over a week (including pulling an all nighter today). I’m happy to have my first certification for the year 2014 already though 🙂

In my opinion the exam contained too many repeating (easy) questions on specific subjects, but there were also some very difficult questions about really specific situations. I personally would’ve preferred more “medium difficulty” questions.

All in all I learned a lot from preparing for the exam and I’m very happy with all the new things Microsoft has added to their new products.

If you are looking to take the exam as well, take a look at my previous post that contains the resources I used for preparation.

Good luck and enjoy. I’ll be going for some well earned sleep now 🙂

Microsoft is offering free exam vouchers for the new exam “74-409 Server Virtualization with Windows Server Hyper-V and System Center” to attendees of the Jump Start. The amount of free exams is limited, so be sure to register for the “Server Virtualization w/ Windows Server Hyper-V & System Center Jump Start” as soon as possible.

Also for those interested in free VMware Certified Associate (VCA) exams, time is running out. For more info, take a look at my previous post.

Today I helped a colleague troubleshoot a couple of systems were unable to activate using Key Management Service (KMS). Basically for this situation it boiled down to this:

Determine for the KMS service

For clients that are not able to activate

NOTE: If you have lots of systems where you need to clear configuration and then attempt activation, you can also perform slmgr.vbs on remote computers using:
slmgr.vbs TargetComputerName [username] [password] /parameter [options]

If you haven’t been able to resolve the issue, you might want to take a look here:

As you might have already read by now in my previous post, TechNet subscriptions are going to disappear. For more info take a look at this blog post and the Subscriptions retirement FAQ.

This is just a reminder that you have until August 31 to buy a last year of technet.

You might also want to backup existing keys and files:
http://www.zdnet.com/five-things-every-technet-subscriber-needs-to-do-before-time-runs-out-7000017687/

In this post I will describe how you can make your lab available over the internet.

When you’ve created your home LAB, you want to be able to use it anywhere. Depending on your situation, one of these options probably best meets your needs.

Examples include the use of:

Since I want to be able to connect from within enterprise environments as well, I chose to use SSTP VPN in Windows Server 2012. The basic steps you have to perform, include:

For some more information, you can also take a look at this:

At the companies I’ve worked for , disk space on the system disk ran out on a regular basis for some systems and caused a lot of monitor calls. These kind of boring repetitive tasks are always the ones you want to automate.

So when I came across the great blog post “Weekend Scripter: Use PowerShell to Clean Out Temp Folders” on the “Hey, Scripting Guy! Blog”, I wanted to post it on my own blog as well. The blog post also describes the process of creating the script very well, which is very convenient for those who are relatively new to PowerShell to scripting and want to learn how to do it better.

If you want to take it even a step further, you could automate it even more. By example by automatically running the clean script when an event is generated that the disk is running out of space. You can configure this using by example:

Or you could use PowerShell remoting to do it on many systems at the same time. This could come in handy by example when after WSUS patching the content in “C:\Windows\SoftwareDistribution\Download” is not deleted automatically.

At work a colleague of mine was looking to modify printer permissions on a Server 2008 R2 terminal server using PowerShell. And to be honest, it was more difficult to do than I had expected.

So naturally, I started looking if someone had already created a script for this same purpose and eventually I found this great script created by Vadims Podans:
PrinterUtils.ps1 / Functions for advanced printer management

My modified script can be found here: http://bjornhouben-web.sharepoint.com/Lists/Scripts/DispForm.aspx?ID=22

Be sure to check Vadims Podans website for other great resources: http://en-us.sysadmins.lv/

I’m a big fan of the Microsoft Virtual Academy JumpStarts. Recently a PowerShell JumpStart has been announced as well that will be hosted by Jeffrey Snover and Jason Helmick. For more information and to register for July 18, take a look at : http://www.microsoftvirtualacademy.com/liveevents/PowerShell-JumpStart. Apparently it’s even a 2 part series.

Also if you won’t be able to join the JumpStart live, the sessions will be recorded so you can view them whenever it suits you.

For those who missed it, this month there will also be JumpStart sessions for For Windows Server 2012 R2 and System Center 2012 R2. For more information and registration take a look at this blog post.

Hope to see you there.

As you may have read already, with Windows 8.1 Preview (and Windows Server 2012 R2 Preview) the start button has been re-added: 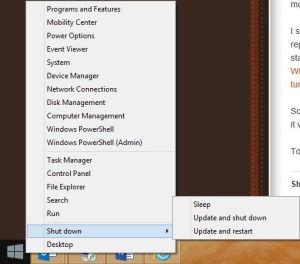 Basically by left clicking you will switch between the modern/metro interface and the desktop (similar to pressing the windows key). By right clicking you will get the menu shown in the image above (similar to pressing windows key + X). For more information and tweaks take a look at:
http://www.thewindowsclub.com/shutdown-restart-sleep-hibernate-windows-8-1

Another often requested feature was to be able to bypass the metro/modern interface start screen. This boot to desktop is now also possible: http://www.thewindowsclub.com/boot-to-desktop-windows-8-1

A lot of people have been complaining and discussing the absence of the start button and the start menu and that the shutdown/restart options where too hard to access.

Personally I simply press CTRL+ ALT + DELETE, click the power icon and choose the action to perform. Or I press the physical power button on my laptop, pc or tablet.

The lack of a start button does irritate a lot when you’re accessing Windows 8/2012 through RDP or any other remote method. Trying to access the hot corners to switch between the metro/modern start screen and the desktop can sometimes be hard, especially on laggy connections (ILO/RSA/DRAC). The same is true for accessing the charms bar (which you use to restart/shutdown).

The re-added start button does solve the switching between the metro/metro start screen and the desktop I described above,but the charms bar is still an issue. You can use the start button for restart/shutdown though.

What I hate most though, is that the start button is simply a button. It doesn’t include the start menu people want to access their programs and settings in a way to are accustomed to. To make it even worse the re-added official start button makes it harder to use some 3rd party start button/menu replacements that were working well (but this will probably be sorted out soon since 8.1 has only been released a couple of days). Classic shell still works well though: http://www.classicshell.net/

The preview version with this start button is not the final version. While I don’t expect Microsoft to re-add the start menu before the finl release, I sure hope they prove me wrong. If you want to have the start menu back, be sure to voice your opinion. This did work for the Xbox one, where Microsoft changed course with regards to Digital Rights Management (DRM).

Even though the start button isn’t what many people have hoped for, there are a lot of other great improvements to Windows 8.1 and Server 2012 R2 though. I’ll try to post more about it in the next couple of weeks.