My blog reached 50.000+ views. Thanks everybody, this really exceeded my expectation and motivates me even more to keep going. Special thanks go out to my fellow bloggers in my blogroll and to those who shared my posts on Twitter, Facebook and other social networks.

Even though my blog exists since January 2012, I really started to blog actively around August and ever since I’ve tried to keep posting on a regular basis. At the start of 2013 I even intended to blog every day. I was able to keep it up for a short while, but it was just too time consuming. Now I try to blog something at least once every 5 days. The blog post count is now at 170.

Personally I think Microsoft is on the right track. I’m really looking forward to all new Microsoft product (preview) releases including Windows 8.1, Windows Server 2012 R2 and System Center 2012 R2 and you can expect some blog posts about this in the near future.

From the stats, it turned out these are the blog posts that are being viewed most, if you’ve missed any of them you might want to take a look at them:

For those interested in the view stats, here they are:

If you have suggestions about what I can do to improve, please let me know. Also if you’d like to see some things covered more or in more detail, just leave a comment.

About 3 weeks before the upgrade took place, I received e-mails informing me about the upcoming update. It included the plan date and also mentioned I could postpone the update. As the date of the upgrade approached I also received mails with information of new features and what had to be done.

The upgrade itself took place on the date that was communicated to me and when it was done I got a mail informing me that the upgrade had been completed. When I logged on to the Office 365 admin center (https://portal.microsoftonline.com/) I immediately found this to be a big improvement. It also showed me some alerts containing links to information about changes and tasks that still needed to be performed like upgrading SharePoint sites.

I didn’t expect any big issues, but I was a bit worried if my SharePoint customizations would keep working correctly:

It is possible to leave the SharePoint site the way it is (at least with this upgrade), but you can also upgrade it and take advantage of the new options. If you are considering upgrading the SharePoint site, you can perform a health check and you can also request an upgrade evaluation copy of the site collection before you actually upgrade.

Probably because of my customizations, the Site Collection Health Check found some problems related to Customized Files that could result in unexpected visuals or behavior.

For now, everything seems to be working fine though on my upgrade evaluation copy of the site collection, so I’ll probably upgrade my site collection soon. If you want to, you can take a look at both the pre-upgrade SharePoint site and the post-upgrade SharePoint site. The evaluation post-upgrade version will only be available until the 23rd of June.

What I did notice, is that the interface of the services have improved and have also been changed to better suit for touch devices. By example the white space between navigation items seems to have increased and everything is a bit bigger.

After the upgrade, I also had to restart some Office 2013 apps once.

Office 365 – Fix for SharePoint message “call us overprotective, but we need to verify your account before opening this document”

In yesterday’s blog post I mentioned that I was looking forward to being upgraded to the new Office 365 in the next 4 weeks.

I did encounter an issue however that I was not able to open files on SharePoint using the desktop version of Office 2013. I kept on getting the message: “call us overprotective, but we need to verify your account before opening this document”. This never succeeded and I couldn’t modify my file using Office 2013. The Office Web App version was working fine though.

After googling around a bit, I found out that this was a common issue for people that are planned to be migrated (pre-upgrade). The solution/workaround for this issue is described here:
Office 365 pre-upgrade users cannot open or synchronize SharePoint files after the Office 2013: March 12, 2013 update is installed

This means it is becoming increasingly important to have proper authentication and authorization methods in place for single sign on (SSO) so users can be more productive. Besides the ease-of-use It can also lead to better security.

Microsoft’s Active Directory Federation Services (ADFS) will make this possible. For more information on ADFS, here are some resources. Keep in mind though that while some information may be outdated, it will give you a broad idea of the concept and the inner workings. The current version of ADFS in Windows Server 2012 is 2.1 , while Windows Server 2008 uses 2.0

If you have some other resources that might be useful, please let me know so I can add them as well.

In the past I’ve created a post to get my public site to become a SharePoint 2010 style team site. The only thing I’d been missing since was a way to allow public/anonymous users to use the search (when trying to perform a search you would have to logon).This also meant that filters in the lists I created weren’t working 😦

Because of the unsupported customizing I did on the SharePoint site, I thought this just wasn’t possible.

Thankfully however, a visitor of my blog (Denis) came across my post “Provide anonymous access to sharepoint lists on Office 365 (Sharepoint online)” and shared this blog post to enable search for an Office 365 / SharePoint Online public site which refers to https://dotnetmafia.sys-con.com/node/1918049/mobile

So now my website http://www.bjornhouben.com and all the content inside it, including the lists is completely searchable.

Office 2013 including Exchange, Lync and Sharepoint has been released to manufacturing (RTM)

As I’ve mentioned in previous blog posts, Microsoft is working hard to get new and better versions of their software released as soon as possible.

The availability is dependent on the platform and your licensing type. More information about this can be found here:
http://blogs.office.com/b/office-news/archive/2012/10/11/office-reaches-rtm.aspx

I have to admit I didn’t expect them to reach RTM status already. I also hope that beta exams won’t be released anytime soon, because then I won’t have enough time to properly prepare 😦

When I tried to include a RSS feeds web part to my public sharepoint site just the way I had done many times on intenal sharepoint sites, I found out that the RSS viewer web part was not available.

After searching the internet I found out why this was the case and I also found a workaround using a custom solution/webpart.

Even though it is possible to use RSS feeds this way on my public sharepoint site, it is not what I expected. In my opinion an RSS feed web part is such a fundamental part of websites nowadays that it should be available by default in Office 365 / Sharepoint online.

I hope that this will be corrected in the upcoming release of sharepoint (2013) for Office 365, but the preview still doesn’t provide this capability unfortunately: 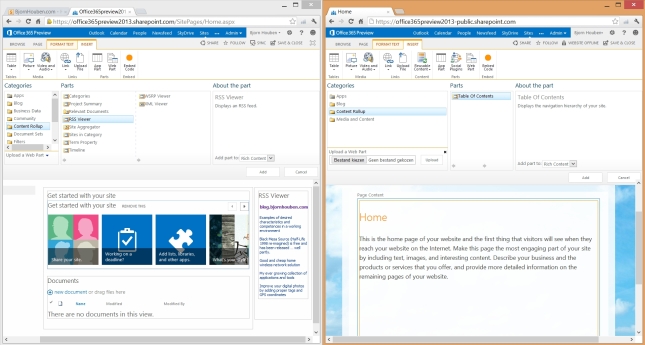 When you first create a public site collection in Office 365 / Sharepoint online you get a default website that looks like this:

Office 365 has been available for quite some time and there have also been two exams available:
70-321 Deploying Office 365
70-323 Administering Office 365
These exams focussed on larger enterprises and features corresponding with this use. More information about these exams can be found in my previous blog post. Keep in mind however that Office 365 is an ever evolving service and that things might have been changed since I wrote this blog post. Even Microsoft has retired and replaced some of their learning content.

Recently a third exam became available that focusses on smaller businesses 74-324 Administering Office 365 for Small Businesses. At the end of August a Jump Start event was held and now the recordings of this event have been made available on Technet Video.

I hope this is useful to you and that it will help you leverage Office 365 better.

Office 365 basically provides you with collaboration services consisting of the following components:

I really like this service offering because of the following reasons:

But don’t take my word for it, just try it for yourself and see if and how you can benefit from it.

Even though I like Office 365, it is far from perfect. For example, one of the reasons for me to get and Office 365 subscription was because (I thought) it would let me easily share website links, applications, scripts using sharepoints lists to the internet.

In reality however, the public facing sharepoint site was very limited and did not provide an easy way to do this. Another option was to create these lists on my “internal” sharepoint site and then provide access to people by inviting them by e-mail. This would however limit my audience / knowledge sharing potential.

After searching for people with similar issues, I came across a workaround that would help me accomplish my goals: http://anonymous365.codeplex.com

Steps to configure a sharepoint list on my public facing sharepoint site that is accessible for anonymous users:

I hope this explanation was helpful and I love to get feedback. Because the groundwork is done now, I can focus on the actual knowledge sharing by populating the lists with content. So you can expect some major updates soon on both my blog posts and the lists below: