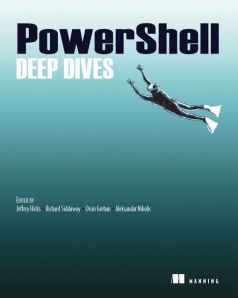 I’ve had the book PowerShell Deep Dives laying around since August 2013. I had read some parts of it because I follow many of the great PowerShell community members that contributed to it. But I hadn’t gotten to reading it completely yet until now.

The title of the book includes “deep dives” implies very deep technical content and I can assure you, this type of content is present in the book. some of the stuff I still need to wrap my head around to understand properly. On the other hand, other parts of the book are more simplistic which you might not expect from a deep dives book.

The book covers a very broad number of topics and technologies. What I liked is that the articles were written by professionals and community members that are specialized in or are very knowledgeable about this specific topic/technology.

As a result of having the broad number of topics and technologies, not all parts of the book might be relevant to you (especially as a deep dive). I found myself skimming over some parts later in the book since it is very unlikely it is or will become useful for me. This will differ from person to person though, so take a good look at the topics being covered in the table at the end of the article.

All in all it was a good read and I think I’ll use the book mainly as a reference for those times that I need the deep dive insights. The book can be ordered from by example Manning.com and all royalties go to charity: Save the Children

Before starting with my summary of 2nd DuPSUG meeting, I want to inform you about some future events first:

Just like I mentioned in the summary of the first meeting there were manu interesting sessions that provided me with more insight and inspired me for practical uses. It was also great to discuss current developments with other knowledgeable and passionate people. The main differences with the previous meeting was that:

Thanks go out to all attendees, especially those presenting, organizing and sponsoring the event. Special thanks to Daniel Bot for helping me fix a (stupid mistake in a) script I was working on 🙂

And now on with the really interesting stuff, the sessions/workshops. Below are the sessions with some info about the speakers and their sessions. I also added notes I took and other information I looked up afterwards. If you come across any errors or have comments, please leave a reply so I can fix it.